The Return of Mine View

The Return of Mine View

This summer, Hull Rust Mine View makes a comeback. The iron ore mine overlook located in “Old North Hibbing” closed in October of 2017 and mining operations moved in. Hibbing Taconite’s mining operations, as seen from Hull Rust Mine View in 2017, moments prior to a blast.

A new location was soon identified, and over the course of the next two years, sitework was done to make the new viewpoint accessible. Andrew Lucia, who grew up in Hibbing, is a designer, artist and academic working with the City of Hibbing to infuse the new site with drama and optimal functionality. 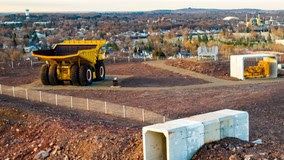 Forterra is a company that makes concrete culverts, like the one shown here. This unique use of their product got the company onsite for a photoshoot.

Today, mining equipment has been moved onsite, including a 38-yard shovel bucket donated by Komatsu Mining Corp. Eventually, a new visitor center, in the style of the culverts, will be added to the site.

In the meantime, the Hibbing Tourist Center Seniors will staff the location daily from a temporary building.

Andrew Lucia took this photo from inside one of the concrete culverts that frame views around the site.

The views don’t stop with mining. See up to 40 miles in every direction atop this “overburden” pile (earth moved in mining but not used to make taconite). Looking to the east from Hull Rust Mine View in Hibbing.

After a lot of hard work by the City of Hibbing, support from Hibbing Taconite, and a great deal of patience from visitors hoping to glimpse where steel gets its start and where 80 percent of the country’s taconite comes from, the site is set to reopen on May 25, 2019.